The Lady at Her Broken Piano 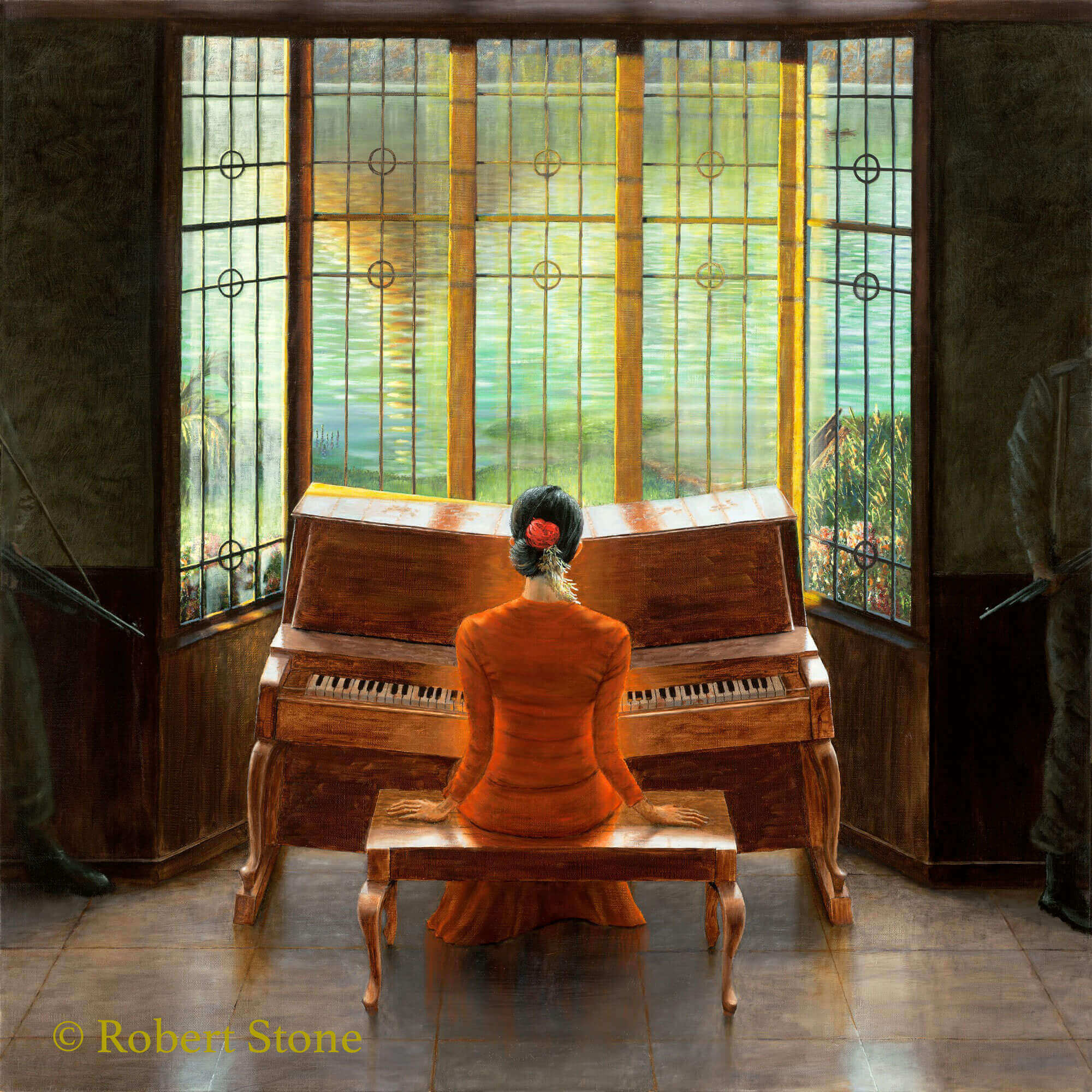 In my early forties, after a fairly long marriage, I once again found myself with a badly broken heart. This time, I felt a lot less melancholy and a lot more anger. In order to avoid committing felonies, I determined to channel my reckless energy into something constructive. I embarked upon a series of long voyages to dangerous places, where, among other things, I built low income houses in Papua New Guinea and made a failed attempt at building a hospital in Nicaragua.
At one point, I found myself in Thailand with a double-entry visa, for which I would have to leave the country after two months and return in order to extend my stay. I had a variety of interesting destinations to

choose from, but I had a long (if vague) interest in Burma, so I determined that if Burma reopened its borders to tourists, that is where I would go. As luck would have it, two weeks into my stay in Thailand, Burma did indeed reopen its borders. I was traveling for a few days with a young French woman who suggested that if I were going to visit Burma, I should really first travel along a dirt road in northwest Thailand, along its border with Burma, to visit Burmese refugee camps and get a fuller understanding of what was happening in Burma. It was there that I first became aware of what Aung San Suu Kyi meant to her people. I think that I had heard of her only once before, when I wrote a letter on her behalf for Amnesty International, but I still could not pronounce her name.
Once inside Burma, I was amazed at the risks that ordinary people took to tell tourists about the democracy uprising in 1988, the election of 1990 in which Aung San Suu Kyi’s party won over 82% of the vote, but which the military dictatorship refused to honor because they lost, and of the continuing oppression they were suffering at the hands of the government. Countless times they got me out of earshot of the ubiquitous spies and told me their stories and begged me to tell others when I returned to the US. At other times they took even greater risks, like when I was taken to see where Aung San Suu Kyi was being held under house arrest.
Thus being impressed with the pluck of the Burmese and their utter helplessness under the thumb of the thugs in power, I resolved to do something on their behalf before I left the country. This was before Aung San Suu Kyi (or simply “The Lady” as she is known to the Burmese) won the Nobel Peace Prize. By this time she had been held under house arrest for a year and a half, with no contact with anyone outside. In 1990, people living in her neighborhood could hear her playing her piano in the afternoon, and that is how they knew that she was still alive. A little while before I was there, the piano went silent. People were afraid that she had been killed in the middle of the night. So I went to her house with a note on a picture postcard of the Santa Cruz Boardwalk explaining that I was a tourist from California and that the outside world knew of her plight (which was not exactly true at that time). At the bottom I wrote a P.S. to the effect that while I did not believe that I would be allowed to give her the note myself, I would wait at the gate outside; and I requested that she write me just a line or two so that I would know that she was alive and well. Needless to say, she never got the note. To make a long story short, I was arrested by military intelligence, taken to an army barracks near the Shwedagon Pagoda in downtown Rangoon, and released after only two and a half hours of interrogation. Had I been a Burmese citizen, I would not be around to tell the tale. I would like to think that I did my part to help keep her alive during that critical time.
After she won the Nobel Peace Prize and was once again allowed contact with the outside world, she was asked about the piano. She explained that it had simply gotten so out of tune that she could not stand to hear it any more. Since then, it has come to symbolize her readiness to govern the country, if only she had a proper instrument to play on.
This, then, with a dose of artistic license, is how I imagine it might have looked inside her house on the other side of the compound wall that February afternoon, flanked by soldiers and gazing at the reflection of the Shwedagon Pagoda in Inya Lake.

Aung San Suu Kyi was released a few years ago and is now a member of the Burmese parliament. She is still considered to be the leader of the democracy movement, and she wields a moderate amount of political power. She has disgraced herself in her refusal to speak out strongly against the oppression of the Muslim Rohingya people in the western part of Burma. Many of the foreign human rights awards that she accumulated over the past thirty years have been withdrawn.
Despite this, I have friends who are Burmese Muslims who still support her. The reality of governing is far more complicated than opposing a government, and her position is still tenuous. While I no longer revere her, ultimately the Burmese must work out their problems themselves.