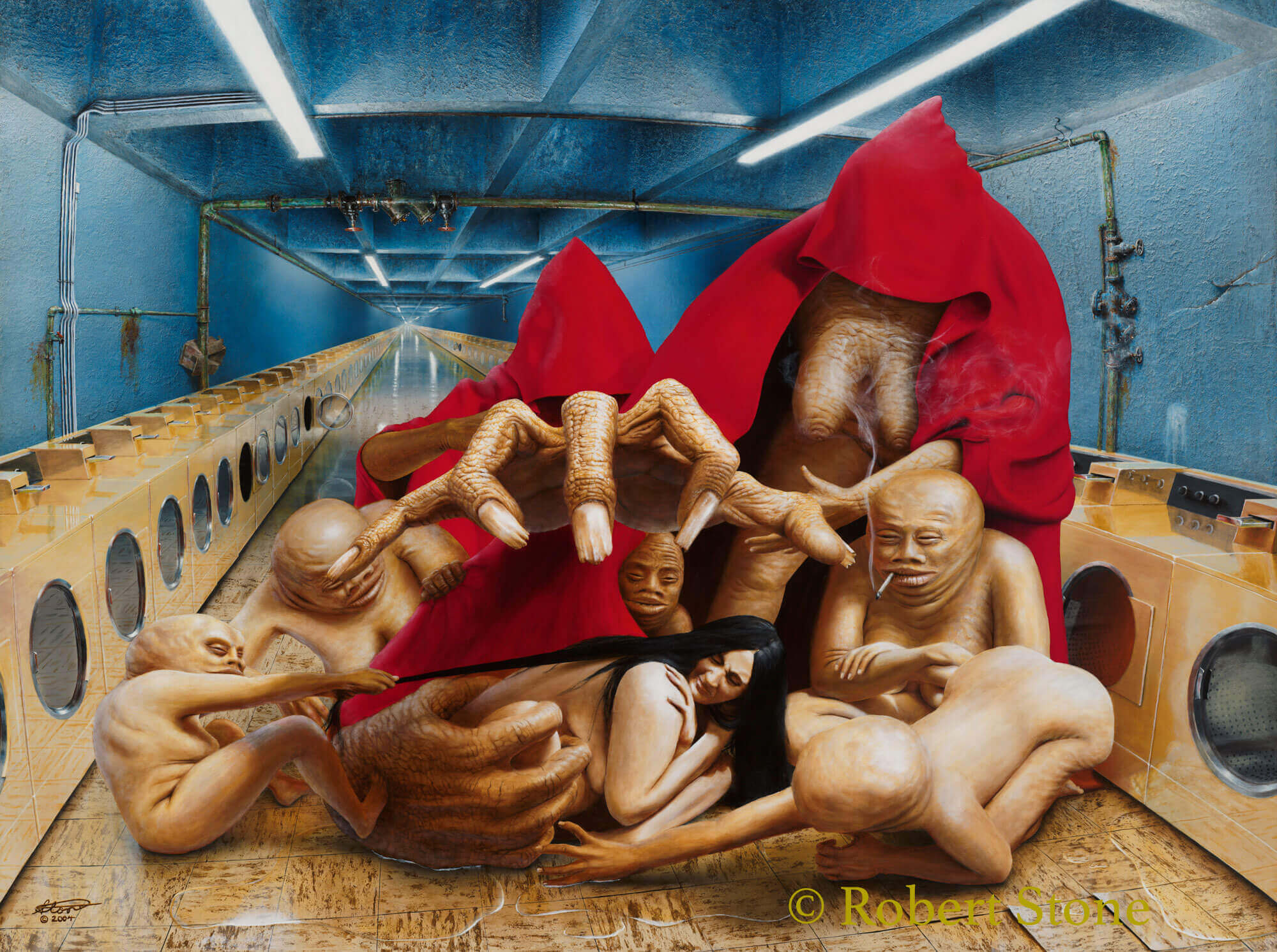 This is a painting about bullying. Believe it or not, I actually witnessed this scene way back when I lived in upstate New York. Contrary to popular belief, New York State is mostly rural. I went into town one evening to do my laundry. This was before I installed indoor plumbing. While I was waiting for my laundry to dry, in came four generations of the female side of a family of pig thieves. No kidding, they had been caught red-handed at a livestock auction near Syracuse trying to sell Leon Stoddard’s stolen pigs.

Other than the pig-thieving, they were supported at public expense. I had a friend who had to make visits to their home as part of her job. She had to investigate why the children were malnourished despite the food stamps. The parents were too lazy to even get up off the couch. As they finished their cans of beer, they just tossed them onto the pile of cans in the corner, already over three feet high.
Anyway, as they started doing their laundry, a fifteen-year-old girl who lived in an apartment over the laundromat came down to use the coke machine. They immediately started to verbally attack her, tormenting her because her mother was dating a black man. This would not have surprised me if it had just been the children taking part. Some school children are inherently mean, and racial prejudice was rampant in those parts. But the whole family was doing it, even the great-grandmother. I guess they had found the one person in town who, in their eyes, had less social standing than they did, and they were not going to lose an opportunity to establish that they were not the absolute bottom of the social heap. I finally told them to leave the girl alone, which prompted them to turn on me while the poor girl returned crying to her apartment upstairs.

Be forgiving if you will, but I cannot muster forgiveness for that kind of behavior.

This is a painting that I worked on for many years, when I hardly ever painted at all. I was painting this when I made the switch from acrylics to oils, so the older parts are acrylic and the newer layers are oil. I started out with acrylics because I thought that they were less toxic and easier to learn with. They dry so quickly that mistakes can be painted over almost immediately, and there is less technical information to learn. However, I have always done a lot of blending, and the smooth effects that I wanted were difficult and time consuming to get with acrylics. I now paint exclusively with oils, and the effects that I want are far easier and faster to achieve.