Drifting with the Wind 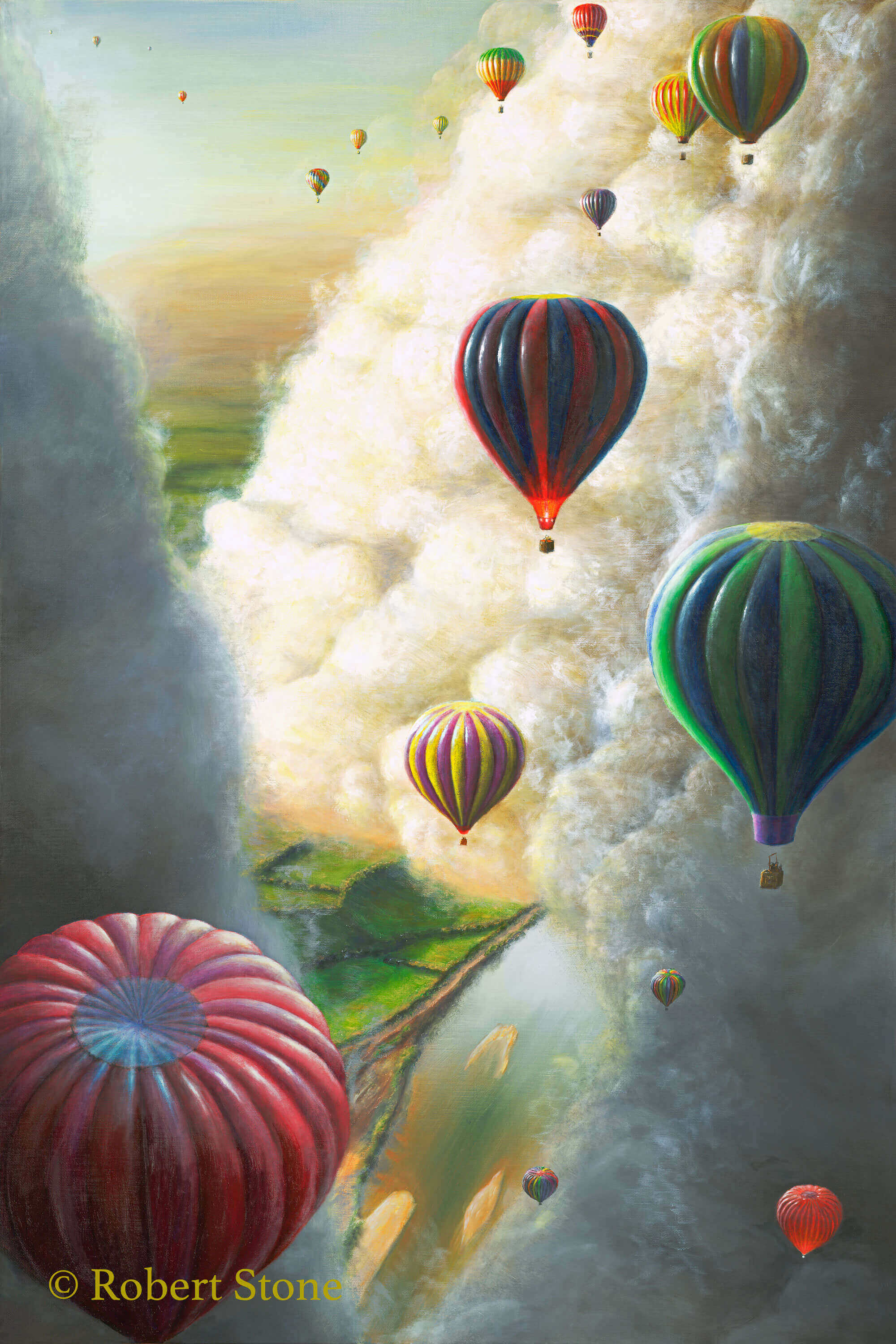 This painting grew out of “Full Moon, Santa Cruz.” I was having a difficult time solving a compositional problem in that painting. I thought about several possible solutions, none of which were right, until an old friend suggested a simple solution. But until that point, I kept having a strong urge to paint hot air balloons in the sky, even though I knew that it was wrong. I finally realized that the balloons should be their very own painting.
I used to fly hang gliders. At times I even soared up to cloud base, and even foolishly up into a cumulus cloud on  one occasion. It would have been natural for me to do a picture of hang gliders, but the balloons kept coming to mind. I love their shape; but as I started to paint them, I realized that something else was compelling me. While hang gliders depend on weather conditions to fly, they are actually very controllable. Not so with hot air balloons. One is much more subject to the vagaries of the wind in a hot air balloon.

There have been difficult times in my life when I would have given anything to be able to control the situation, to make things turn out the way that I wished. But things were not subject to my control, and when I was finally able to surrender, let go, just go with the flow, I felt a tremendous sense of peace. Perhaps it was just giving in to laziness, like the peace that a drowning man is said to experience when he gives up and inhales water; but at those few times when I have recognized that I was out of control anyway and floated wherever the currents took me, I have always been washed up alive onto an unexpected but delightful new shore.
My metaphysical and spiritual beliefs can be summed up in one sentence: I do not know the answers to everything, and I am quite comfortable with that. Not that I didn’t used to try to find the answers when I was younger. I was a philosophy major for a while, and I even did a stint as a monk. I have met countless people in my long life who claimed to have the answers to life’s mysteries. I have never met a single person who actually had those answers; they merely conjecture. I learned much more about the meaning of life from my time as a Chicago cab driver, and hitchhiking for thousands of miles back and forth across the country, than I did in the monastery.
The clouds in this painting remind me of a time, years ago, when my plane was landing at O’Hare Airport, flying down between clouds such as these, and I am glad that I was finally able to use that beautiful image in a painting. One would never see balloons flying so close to cumulonimbus clouds in real life. The conditions are much too strong for balloons. But I love the thought of being swept along on air currents in the canyons formed by the clouds, taking courage against the implied danger, having faith that an airliner will not suddenly emerge from the cloud, and having the sense that others are on the same journey. I don’t know where we are going, but I am enjoying the ride.
As I was painting this one, I thought more and more about a dear friend who was suffering from a rare form of cancer, and I began to think of it as a healing icon for her and others like her.